The global burden of pathogens and pests on food crops

The global burden of pathogens and pests on food crops

Why is this important? 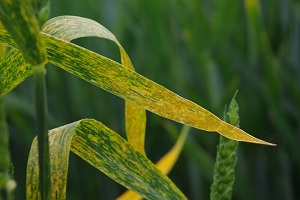 Crop pathogens and pests constitute a burden to food production worldwide: plant diseases and pests are frequent causes for crop losses – losses in quantity or in quality of harvests – irrespective of the agrosystems, whether in small-scale, diverse, single-cycle, "traditional" agriculture, or in large-scale, genetically uniform, monoculture-based, "intensive" systems. Yet, while pathogens and pests (P&Ps) are widely considered an important cause of crop losses, and sometimes a threat to food security, precise figures on these crop losses are very hard to produce.

Estimating losses is difficult for two reasons. One is because P&Ps are integral parts of the human-made agrosystems, in which they have co-evolved with crops over millennia. As a result, the effects of P&Ps in agriculture are very hard to disentangle from the complex web of interactions among factors at play within agrosystems. The second is due to the sheer diversity of P&Ps, which includes viruses and viroids, bacteria, fungi and oomycetes, nematodes, arthropods, molluscs, vertebrates and parasitic plants. This diversity means that the quantification of losses on an individual pathogen or pest basis, for each of the many cultivated crops, is a daunting task.

How the problem was addressed

During the 10th International Congress of Plant Pathology held in Beijing in 2013, the recently created Crop Loss Subject Matter Committee of the International Society for Plant Pathology (ISPP) decided that a survey on P&P losses among crop health experts should be conducted. This worldwide online survey was conducted with the support of the ISPP between Nov 1, 2016 and Jan 31, 2017, reaching over 2,500 members of the ISPP, along with nearly 100 specific crop health experts of several organisations, including CGIAR institutes and Rothamsted Research.

Using a very simple online questionnaire, we collected almost 1,000 responses from 219 crop health experts on five major food crops (wheat, rice, maize, soybean, and potato) in 67 countries. We chose these five crops since together they provide about 50% of the global human calorie intake. The 67 countries represent a substantial fraction (84%) of the global production of these five crops.

Losses are substantial and they vary across food security hotspots

The study also provides loss estimates to individual P&Ps for these crops globally, as well as in several global food security "hotspots". These hotspots are critical sources and/or sinks in the global food system: North-West Europe, West and North Africa, the plains of the US Midwest and Southern Canada, Southern Brazil and Argentina, the Indo-Gangetic Plains of South Asia, the plains of China, South-East Asia, and Sub-Saharan Africa.

Our results highlight differences in impacts among crop pathogens and pests and among food security hotspots. But we also show that the highest losses appear associated with food-deficit regions with fast-growing populations, and frequently with emerging or re-emerging pests and diseases

Quantification of crop losses provides a measure of past advances and a benchmark for future progress in crop health management. Our results provide a basis for research and policy prioritisation of crop health management. Some P&Ps occur chronically – meaning they occur regularly and over large areas. For chronic P&Ps, efforts to deliver more efficient and sustainable management tools, such as resistant varieties, are needed. Some P&Ps are emerging or re-emerging and are associated with recent large increases in losses in specific food security hotspots. For emerging or re-emerging P&Ps, urgent action is needed to contain them and efforts to generate long term solutions, such as varietal resistance, need to be undertaken rapidly.