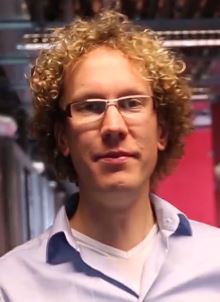 Claas Willem Visser is an Assistant Professor at the Faculty of Mechanical Engineering of the University of Twente. His lab develops multi-scale functional materials. By using fluid droplets or bubbles as "building blocks" for solid materials, their mechanical, acoustic, electrical, and biological properties can be optimized for various application fields.

From 2016 to 2018, Visser worked as a Rubicon Post-Doctoral Fellow at the Harvard John A. Paulson School of Engineering and the Wyss Institute for Biologically Inspired Engineering. Here, he developed a new method for additive manufacturing of foams in the lab of Prof. Jennifer A. Lewis.

Before that, as a post-doc at the University of Twente, Visser co-developed a new technology for particle fabrication and 3D printing named "In-air microfluidics". This technology is now commercialized in spinoff company IamFluidics, of which Visser is co-founder and chief scientific officer. He pursued his Ph.D. (2011-2015) under the supervision of Chao Sun and Detlef Lohse in the Physics of Fluids group at the University of Twente. Here, he contributed to fundamental studies on droplet impact as well as applications such as laser-induced transfer of metals and droplet-based bioprinting.

From 2006 to 2011, Visser worked at Tata Steel Research, Development, and Technology as a researcher and project leader. He initiated several national and international research projects on hot rolling of metal strip.

Visser received his MSc degree in Applied Physics from the University of Twente in 2006. His MSc project concerned drag and lift forces on bubbles and particles in rotating flows, this project was supervised by Dr. Hanneke Bluemink and Prof. Detlef Lohse.

Moving and deforming a liquid drop by pulsed laser irradiation

Geometry-influenced Slippage on a Bubble Mattress in Microfluidics

Your message has successfully been sent.
Your message was not sent due to an error.
If you made any changes in Pure these will be visible here soon.